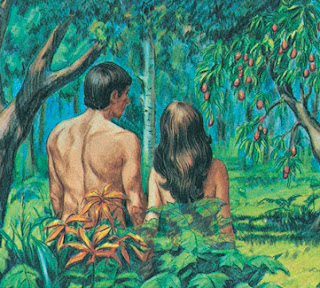 In Genesis 1:26-28 we see a brief overview describing the creation of the first man and woman who were the parents of mankind.

God announces His plan that mankind (the first “them” in v26) have dominion over all the earth.

In manifesting this plan, first God creates man (Adam) — “created He him” — in His own image, emphasizing that God created man first and the man was in God’s image.  Note that the pronoun “him” (referring to Adam) is singular.

Then scripture reveals that the plural “male and female created He them” emphasizes that God created the male and the female as individuals.

God first created the “him”, female did not exists until the “him” (single individual) became a “them” (two individuals).

Genesis chapter 2 expands on the introductory summary of day six in chapter 1.

In verse 2:7 we see a more detailed account of how God created man:

Genesis 2:7 – And the Lord God formed man of the dust of the ground, and breathed into his nostrils the breath of life; and man became a living soul.

Later in Genesis 2:21-24 we see a more detailed account of how the first woman, Eve, was created

Genesis 2:21-24 – And the Lord God caused a deep sleep to fall upon Adam, and he slept: and he took one of his ribs, and closed up the flesh instead thereof; and the rib, which the Lord God had taken from man, made he a woman, and brought her unto the man.  And Adam said, This is now bone of my bones, and flesh of my flesh: she shall be called Woman, because she was taken out of Man. Therefore shall a man leave his father and his mother, and shall cleave unto his wife: and they shall be one flesh

The rib taken out of Man (Adam) consisted of bone and flesh and was used to make the first woman, Eve.

God is not the author of confusion
There is a false teaching floating around that God first created Adam as both male and female.   Many people “parrot” and repeat this teaching because they do not know the God’s words and think it sounds very intellectual.

Consider that since Adam was created in God’s image (Gen 1:27), then if Adam was a mixture of male/female it would mean that God was both male and female.

Jesus was the fullness of the Godhead bodily (Col 1:19) and the second Adam (1 Cor 15:47).  Does this mean that Jesus was both male and female too?

According to God’s own law (Deut 22:5), if Adam were a confusion of male and female he would be an abomination.   This confusion does not come from the Bible.  Instead it has to be “read into” the bible from an outside source…

The heresy of God having both a masculine and feminine nature comes from mysticism known as the “tradition” or Kabbalah  (note this is mystical kabbalah which differs from Judaism that follows the Tanakh).

In Kabbalah this gender confusion is known as the “divine feminine” and various other terms.

The false “gods” of these pagan religions often have both male and female parts.  If you look up “baphomet” you will see a depiction of this false god which is an abominable mixture of male/female, animal/mankind/angelic, mammal/reptile/bird/fish (Deut 4:16-18).

There is no Biblical support for this false doctrine.  One has to wrest the scriptures in Genesis to try and suggest any kind of legitimacy.  There are no supporting witnesses in the rest of scripture.  There is no dependency relationship with other biblical doctrines. This teaching is in contradiction to other very clear scriptures.  This teaching also disparages, blasphemes, and confuses the nature of both God and Jesus in contradiction to how He has revealed Himself in scripture.

The teaching that Adam was created as male and female is not from the Bible.  It comes from the traditions of men.

Matt 15:3 – But he [Jesus] answered and said unto them, Why do ye also transgress the commandment of God by your tradition?

Notes:
– it can be said that the genetic information for all of mankind (both male and female) was in Adam
– the focus of this article is that there is no support for Adam being both masculine and feminine either in nature, sexuality, gender, etc…
– God is Spirit and not flesh and bone (Luke 24:39) if sex is solely an attribute of the flesh, then perhaps it could be said gender does not apply to God — however, God has represented Himself in scripture as male in nature, presents Himself as Father and with masculine pronouns so to try and represent Him any other way is creating a false god
– when the Word took on flesh and bone, He, Jesus, took on the male sex and was the Son of God
– the role and importance of women is supported throughout scripture and is in no way diminished — to the contrary the significance of the woman is magnified by a proper understanding of Genesis 1 and 2