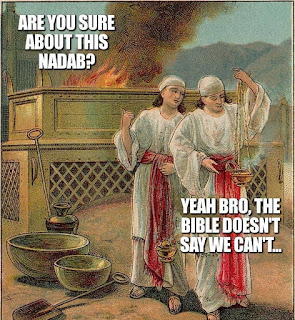 Then Nadab and Abihu, the sons of Aaron, each took his censer and put fire in it, put incense on it, and offered profane fire before the LORD, which He had not commanded them. So fire went out from the LORD and devoured them, and they died before the LORD.

And Moses said to Aaron, “This is what the LORD spoke, saying: ‘By those who come near Me I must be regarded as holy; And before all the people I must be glorified.'” So Aaron held his peace.

When we come before God, it must be on His terms. He is the Creator of everything. He is Holy, Righteous, Good.

All the time I hear, “Well, I just can’t believe in a ‘god’ that would do such and such”. When people hear things in the Bible that demonstrate God’s Holy judgement, they balk. They think that their limited human judgement is superior to God’s all-knowing, all-seeing judgement.

Instead of seeking to understand what God was doing in a particular instance, they instead create a god of their own imagination. This imaginary god that they are comfortable with does things they way the person thinks they should. This false image of their own creation is what they worship and thereby have violated the first two commandments.

We should focus on what God has told us to do, instead of trying to see what we can get away with.